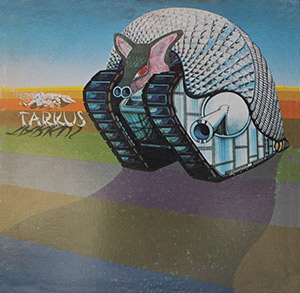 My love of music began for me when I was around the age of 11 or 12 back in the early 70’s. It was at this time I had the privilege of hearing two albums that both happened to have songs on them that were over twenty minutes each and I fell in love with both of them. I would listen to one or the other every night to go to sleep with while wearing those nice big and bulky old fashioned head phones (yes I learned how to get positioned right so that I could go to sleep). The first one is where my passion for Pink Floyd’s music came from with their 6th studio album Meddle and the 23 minute plus masterpiece Echoes. The second one was Emerson Lake & Palmer’s second album, but really their third (long story not told here) “Tarkus” and the title track with the same name.

To give you an idea about what I thought about the album “Tarkus” I even did a school assignment on the album in the 6th grade. I still have the record and here is a picture showing were I cut out Tarkus for the paper. It was simple to do an assignment about war using the album detailing all of Tarkus’s battle victory’s.

All of this thoughts came back to me in spades on March 11th when I heard the news that Keith Emerson had passed away. As we learned later he took his own life that night due to possible depression issues arising from the fact that he had nerve damage that hampered his playing. Keith’s ability to take classic composition’s and add his own music style to it forever changed music. He was one of the first musicians if not the first to master the Moog Synthesizer and fluently incorporating it in with the piano, organ and other key type instruments of destruction then you add in the vocals, song writing and guitar (bass, lead and acoustic) playing of Greg Lake and one of the greatest drummers ever Carl Palmer ELP helped put Progressive Rock solidly on every radio station in the world.

Although there are other albums or songs that showcase more of Keith’s skills I have chosen my favorite ELP song “Tarkus” to use as my in memory of post.

“Tarkus” comes in seven parts. First we have the hard rocking two minute 43 second “Eruption”. As you listen to it you can get the feeling of what it must be liked to be born from an egg in the middle of a volcano. Keith ability to go from one instrument to the other is amazing. You get a sample taste of just about every instrument he plays while flawlessly moving from one to the other. Then you add in Palmer’s drumming that doesn’t at any part try to over power the song put keep it all moving and in the end the gun tooting steel Armadillo type creature is born. We progress into “Stone of Years” which was co-written by Greg Lake and Keith Emerson. To me it gives us a little background of Tarkus growing up and we get Lake asking our cannon blasting hero many questions that a parent might be asking there “know it all” teenager. Keith pretty much stays with the organ on this tune and about the half way point goes off on a very controlled rampage that brings life into the subtle song.

“Iconoclast” is a Pterosaur that drop bombs from it’s wings like the old fashion airplanes we used to see in the old WWII films. You can tell when this song kicks in. It’s Tarkus’s first big fight and Keith lets us know it in the only way he knows how to. Intense action for the 1 minute plus that it takes our armed Armadillo to demolish this lying creature and we get transformed into “Mass”. This crawly like creature with a steel head cover gives Tarkus a bigger fight then the winged beast but as the first few lines of the song go:

“The preacher said a prayer.
Save every single hair on his head.
He’s dead”
This is my favorite part of the song. The lyrics during the three minute part seem like sections of the battle where the bug creature is begging for his live before our hero destroys him. The song takes in a life of it’s own. When Greg does the singing parts it’s almost like Tarkus is in a holding pattern awaiting for his enemy to attack then as the singing parts come to an end Emerson kicks in with some of his multi-instrumental playing. With his playing style you can tell how each attack our hero is making is going. In the beginning the attacks are some what slower and more precise buts towards the end of the battle Tarkus pounds the victim with everything that he has. 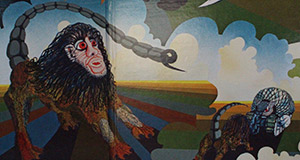 You know when “Mass” ends and we are coming up on Tarkus’s greatest battle right around the 11 minute mark. “Manticore” is on his way and just by the sound of some of Emerson’s short barrage’s on the organ, Palmer’s drums and Lake’s intense guitar play for the one minute plus that it takes the “Manticore” to get in front of our hero you can tell that he is a beast no one whats to fight. The way that the band adds in some mellower breaks in the song you can vision the arrogance that the Lion/Scorpion creature possesses. “Battlefield” is the 4 minute battle between our hero and the “Manticore”. This the 6th part of the tune and was written by Greg Lake. The music style and the lyrics definitely tell us that it’s Greg’s work.
“Clear the battlefield and let me see
All the profit from our victory.
You talk of freedom, starving children fall.
Are you deaf when you hear the season’s call?

Were you there to watch the earth be scorched?
Did you stand beside the spectral torch?
Know the leaves of sorrow turned their face,
Scattered on the ashes of disgrace.

Every blade is sharp; the arrows fly
Where the victims of your armies lie,
Where the blades of brass and arrows reign
Then there will be no sorrow,
Be no pain.”

The band leaves us with Tarkus’s victory march “AquaTarkus”. A instrumental track written by Keith Emerson.

Keith Emerson will be sorely missed by many people but the legend of all of your music wither it’s your solo work, movie soundtracks, The Nice or ELP will live on for ever. No musician proved that a classical music up bringing does not limit you to only classical music more then you did. RIP Keith!

12 thoughts on “ELP “Tarkus” In Memory of Keith Emerson”