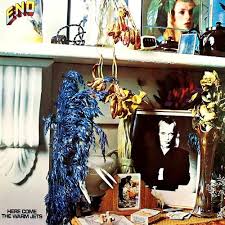 This song might have the greatest guitar solo ever put down on vinyl. If you were to look at any web posts, magazines or other forms of media about the greatest guitar solo’s ever you will not find this song on any of them. I wish that I could tell you why, maybe because it is not well known. Brian Eno’s style of music doesn’t create such a stir within the music industry. Maybe because his music has always been more advanced then the times. This song has never got the publicity that it desires for it’s guitar solo but maybe it’s time we try to change that.

“Here Come the Warm Jets”, is the debut album by Brian Eno. Produced by Eno himself and released on Island Records in 1974. Eno’s music style has been described as experimental rock, glam rock, electronic well as art rock. “Baby’s on Fire” is the third track off of the record. Eno has always had his own style and as the song starts off with a very distinct drum symbol sound used for the beat through out. Eno begins singing “Baby’s on fire, you better throw her in the water, look at her laughing, like a heifer to the slaughter” you know that Eno’s world of music is awaiting you.
At around the 1:25 mark Robert Fripp’s of King Crimson fame begins belting out his roughly 3 minute guitar solo. With the distinct drum symbols keeping the beat moving through out the whole solo you are amazed as to how the guitar solo keeps in engaged in the song. There is no repeating licks over and over but a guitar god playing at his best. At the end of the 3 minute attack, Eno begins singing again and you take in the solo you had just heard. Mind blowing? Why has nobody ever talked about this guitar solo? If you like songs that have killer guitar solos then this song is for you. So the next time you see one of those “greatest guitar solos ever” surveys put in a vote for Baby’s on Fire and Robert Fripp.