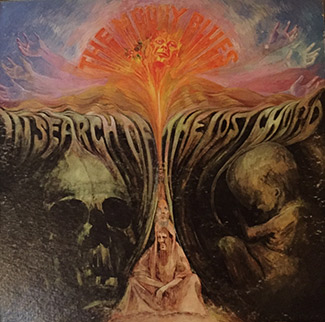 In Search of the Lost Chord

“Legend of a Mind”

This masterpiece, written by Ray Thomas, for the third album, In Search of the Lost Chord by The Moody Blues, speaks volumes for the 1960’s sound and culture that was the psychedelic scene.Legend of a Mind is about the LSD icon Timothy Leary. We like to think that the song is more about the high one feels while on a LSD fueled trip and how you come down firmly to the ground without all the downfalls that come with most other illegal drugs.

Recorded in 1968 at Decca Studios in West Hampstead, London and put out on Deram Records this record was a change for the group as they got away from the orchestra backed sound that made the iconic hit Nights in White Satin such a huge success from there second record Days of Future Passed. You still hear Nights in White Satin on the radio all the time along with a few other great Moody Blues hits like Ride My See-Saw, Tuesday Afternoon and Question but Legend of a Mind is one that you don’t hear anywhere and it seems that many of us have forgotten what I great song it is and how much it represented the hippy movement of the late 1960’s and Timothy Leary himself.

He’ll take you up, he’ll bring you down,

He’ll plant your feet back on the ground”