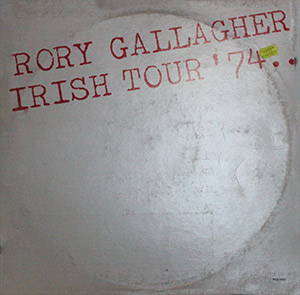 As the story goes, “One day someone asked Jimi Hendrix what it was like being the greatest guitar player in the world?” And his response was “I don’t know why don’t you go and ask Rory Gallagher. Now this quote has never been confirmed but it says a lot about Gallagher’s guitar skills. Like our last post about “Roy Buchanan” Rory was taken from us much to early as we have missed hearing him play and seeing that magnificent 61 Sunburst Stratocaster. Here is a great interview of Blue’s musician Joe Bonamassa talking about what it was like to play Rory’s Strat one night will he was on tour in London back in 2013.

As we all know Gallagher passed from us in 1995 due to a infection while awaiting a liver transplant. Due to his rare blood type finding a donor was very difficult. As one who has had a transplant and takes a few pills ever day, getting an infection or sick in general is always a concern that we have around here. On the day Rory Gallagher was laid to rest 15,000 people lined the streets of Cork, Ireland to pay there respects. The family of Rory has set up a outstanding web site that tells you all about Rory and has many links to videos of Gallagher showing off his guitar skills. Or you can read about all the landmarks in Ireland that have been renamed or dedicated to Rory like the street named after him or the bronze statue of Rory playing his beloved Stratocaster. Maybe you would want to learn about the the beautiful head stone at his burial site that is shaped like an award that he won in 1972.
Here are a but a few of the links

Here is a couple of our favorites for your enjoyment.
“A Million Miles Away”

A great documentary about Rory and his legacy.