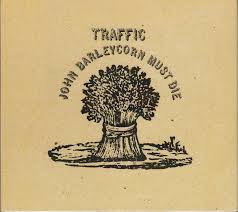 Traffic had so many great songs back in the 1970’s that didn’t get the radio play they deserved we had a hard time coming up with which one to write about. John Barleycorn is a traditional arrangement that according to the back cover “is said to have come from Oxfordshire, Sussex, Hampshire, Surrey and Somerset, and there are estimated to be between 100 to 140 versions. The earliest known copy is of the age of James I. in the Pepoysian collection 1465 printed in black letter by H. Gorson (1607-1641).” There are however many questions about the origin of the poem that we will not get in to here.

This version was written by Steve Winwood and is off of the fourth Traffic album. John Barleycorn Must Die was sort of a rebirth record for the band since original member Dave Mason left the band. Recorded in 1970 at Island Studios and released on Island Records, the album had Winwood on Acoustic Guitar, Piano and Vocals along with original members Jim Capaldi on Tambourine, Vocals and Chris Wood playing Flute and Percussion.

What makes this six minute plus song so great is the flute playing of Chris Wood. The style and grace he displays on this acoustic masterpiece really showcases his talent. Either on one of his short beautiful solo’s or simply playing in the background along with Steve Winwood’s acoustic guitar it just makes you want to listen to the song over and over.