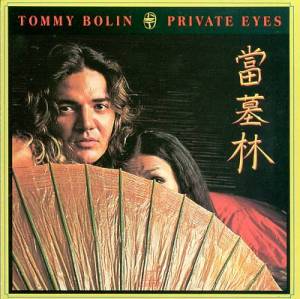 Private Eyes was the second solo record by Tommy Bolin. Produced in 1976 at Cherokee recording studio in LA and released by Columbia records. Unfortunately this would be Tommy’s last studio recorded. Six months after it’s release Bolin died of a drug overdose.

“Post Toastee” is a nine minute epic song that showcases Bolin’s masterful guitar playing along with everything that he had learned playing with the likes of James Gang, Deep Purple and as part of the session band for the jazz fusion record Spectrum by Billy Cobham. The saddest part of Bolin’s story is his greatest song is overshadowed by the fact that is about drugs and overdoses that many of his friends had went through and how he could stop himself from taking that same path.

As we progress through the beginning on the song the guitar is obviously the focus point and after they blend through the lyrics (Not many for a nine minute song) the band starts this slow grinding sound that just builds up more and more as the song goes on. You can really hear Bolin’s fabulous guitar playing leading the way. Around the 4:40 mark the band begins to lower the tone and bring the song down to what you think is the end.

At the five minute mark the music stops and gradually starts up again first with a gentle guitar, then the saxophone and so forth till all instruments are jamming again. Then your rest period ends as the group starts to pound in out again around the 6:30 mark with Tommy Bolin’s pronounced riffs pulling us through the rest of the song. I have never meet anyone that had seen Bolin life so if there is anyone out there we would love to hear from you. Knowing this song would be Tommy’s encore song or last song played we can only imagine what he could have done with it. Rock on Tommy you just add to the list of rock legends that the people up in the skies can enjoy daily while we done here have only suffered not having you around to make more great music for our enjoyment.

This excerpt from the Official Tommy Bolin website might say it best “The nine-minute epic “Post Toastee” is the track that really sets the heather alight. It’s a little-known classic featuring exotic percussion, swathes of incisive lead guitar, and great vocal harmonies from Bell. The album version was reportedly edited down from a take lasting almost twice as long. If the master-tape still exists, it would be wonderful to hear that un-pruned version.”