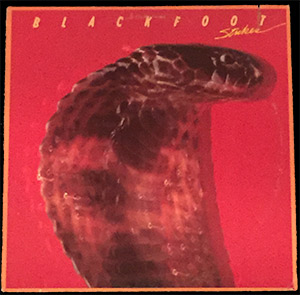 For our third installment on songs about trains we decided to blast out some good old fashioned southern rock & roll, with this classic tune by the band Blackfoot. Train Train was written by the late Delta Blues banjo, harmonica and Blackfoot Indian musician Shorty Medlocke, for his grandsons band Blackfoot. It’s been rumored at times that Shorty was one of the musicians that Ronnie VanZant and Allen Collins wrote the classic hit “The Ballad of Curtis Loew” about.

Shorty Medlocke’s grandson for those of you not to familiar with the band is none other then Rickey Medlocke, who besides being the lead man for Blackfoot, also has done a few stints with the greatest southern rock & roll band of all time Lynyrd Skynyrd. Rickey began his music career back in the early 70’s with Skynyrd and in the late 1990’s rejoined the band and to this day is still playing with the them.

Blackfoot “Strikes” was the third album by the band, but the first record that landed the band some success with their radio stand by “Highway Song” which turned out to be the bands signature power rock ballad with the likes of other southern rock bands power hits like The Outlaws “Green Grass and High Tides”, Skynyrd’s “Freebird” and Allman Brothers / Molly Hatchet’s “Dreams I’ll Never See”.

Train Train starts out with Shorty’s monumental harmonica making that classic train taking off sound. Once the train starts to rolling the band kicks in without missing a single beat. But instead of wondering if the train is going to heaven or hell we are treated to the A typical song about trains where the man or women is getting on the train to get away from a failed relationship. No controversy needed just give us 3 1/2 minutes of some of that good old fashion southern rock and roll.

Roxie rocking out to “Even in the Quietest Moments”